In this series of posts, I’m trying to work through some of the key differences between the folk arts and other types of creative activities when their participants are studied in terms of online/digital communities. Having written about the issues surrounding transmission and community in my two previous posts, in this post I’m going to grapple (very briefly!) with the strange antagonistic (or complementary) forces of innovation and tradition. 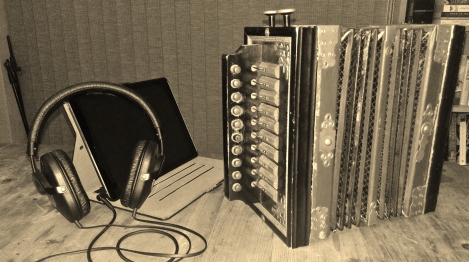 My contention here is that folk/traditional activities might differ significantly from some of the creative practices that are often discussed by scholarship on digital culture, for the following reason: much of that scholarship concentrates on exploring — and celebrating — the potential for collaborative innovations to occur via (specifically online) digital media. The interesting “problem” for the Digital Folk project is that, in the world of the folk arts, every impulse to innovate disrupts or clashes with an opposing (often stronger) impulse to do something precisely because it has been done for a long time (for some people, the older the tradition, the better!). Conservation may not be a primary or explicit motivation for all participants in the folk arts (in fact it certainly isn’t), but there is a very common desire to enact a respect for — and celebration of — cultural expressions rooted in the past. When I have interviewed people about why they take part in their particular folk activity, they often start by explaining their enjoyment in terms of artistic aesthetics, social relationships, and so on; but it doesn’t take long before they express their satisfaction at playing their part in the upkeep of a tradition.  And the concept of “heritage” — particularly zeitgeisty at present — is never far away.

The “tradition” aspect may be located in a particular unit of traditional material (e.g. a song, a tune, a dance, a story, etc.), but it may also be a way of engaging with material (e.g. a style of singing, playing a tune on a particular instrument, wearing a traditional costume, etc.). At least one of these categories is evoked in any folk arts activity, and very often both. OK, there are plenty of (e.g.) grass-roots folk musicians who write their own tunes, but for every self-penned melody they write, they are expected to know many more that are of anonymous authorship and unknown date. Meanwhile, there are many more grass-roots participants who don’t actively generate new material, and who have no desire to do so. A large proportion of folkies just want to play… that is, to play the old “traditional” tunes that they learn from books, archives, CDs, videos and (still, crucially) each-other in face-to-face contexts.

That said, of course, I have no desire to suggest that the folk arts are somehow “stagnant” in comparison to other vernacular, creative activities. Innovation certainly does take place in the folk arts, but it usually resides in the particular interpretation of traditional material by an individual or group. In fact, it is a conscious concern among folk musicians, dancers, etc., that their renditions of old material be in some way different from previous versions. Participants are encouraged to develop a new or unusual “take” on the old content, recontextualising the work in a way that acknowledges its relevance to contemporary society – that is to say, innovating in a way that celebrates folk’s “timelessness”. In many ways, what we have here is an articulation of the strange, blurry lines that exist between “performing” and “creating” in other senses, and this is something I will explore further down the line. Anyway, ubiquitous among folk artists is the discourse of a living tradition (with the ostensibly organic evolution of material being considered a once “natural” result of oral transmission). Recently, that discourse has been given a very personal (or individualist) flavour, with many a folk music workshop communicating the need to “make the tune/song your own”. The opening paragraphs of the English Acoustic Collective Summer School‘s website gives a clear sense of this. And so we find another interesting contradiction: while community is foregrounded as a rationale and driving force of folk activities, the “rise of the individual” would appear to be at hand — particularly in folk music — and there seems to be an artistic imperative that material be (at least to some extent) refashioned by the lone craftsman. The collaborative innovation and creativity tropes common in much recent digital sociology literature therefore seems a problematic place from which to start making sense of some elements of the folk case (although I suspect that dance and other fundamentally group-oriented practices may sit more neatly within that narrative).

So generating the “stuff” of material culture is a secondary activity among many folk participants; developing innovative style in the performance of pre-existing repertory is becoming seen as more important, but rather individualistic. However, other types of innovation are clearly going to be very important in the study of folk arts as digital culture. The workshops that took place at the Digital Folk Launch Event illustrated to us that those involved in developing digital and online systems and opportunities for facilitating participation in folk arts activities are as inclined towards collaborative innovation as any other creator. The history and ongoing development of abc notation as a method for the easy, efficient distribution of folk tunes online illustrates that there has been (and will certainly continue to be) considerable collaborative innovation when it comes to exploring transmissive methods and technological opportunities.

These very particular tensions between the simultaneous impulses towards innovation and explicit conservativism, creation and performance, collaboration and individuality, etc., are precisely why (I believe) this research will throw up some quite different results to the digital ethnographies that have come before, and it’s why I wanted (a) to do the study, and (b) to be part of an multidisciplinary team, with David Gauntlett and Cinzia Yates.

The Digital Folk Report has launched!

On 13th February we were delighted to be joined by a wonderful range of folk activists, folklorists, music and dance organisation representatives and digital media specialists to herald the publication...

My Tweets
Pytheas Theme by WPExplorer Powered by WordPress
Recommended
The study of digital media and creative culture: why the folk arts are a special case (2) Folkies and community
In the previous post, I suggested that the folk arts…