Research collaboration often results in discussions that illustrate perfectly the need to “step outside” of one’s research context every now and again, and to look at the people and activities that you’re studying from a newcomer’s perspective. I’ve recently enjoyed such a discussion with my collaborator David Gauntlett as we worked towards the launch event for our project – Digital Folk.  The discussion has revealed some big, important aspects of the folk arts which I am (as with most people working in/with the folk arts for a long time) guilty of taking for granted – things that are worth thinking about carefully when contemplating the relationships between the folk arts and new technologies and digital media. And, given the nature of the topic, it seems apt not just to get some of these “big ideas” down in writing, but to post about them here…  So my intention is to work through these ideas over the next few blog posts.

More about the Digital Folk project can be found here, but in a nutshell, it aims to understand — or, at least, improve our understanding of — how and why participants in the folk arts in England (e.g. folk musicians, dancers, mummers, storytellers, etc.) engage with digital media/technologies. Beyond the straight-forward “what?” and “how?”, we’re also trying to understand the kinds of impacts that these media/technologies are having (1) on the folk arts as intangible and material culture, but also (2) on the people that take part in them. And, underpinning all this is a desire to understand how folk arts participants reconcile the thoroughly modern nature of digital media and communications with the historically rooted, traditional nature of the things they set out to achieve.

OK, so here are my reflections on why “folk activities” or “the folk arts” are very different from the other types of creative  occupations that have received growing attention as online communities of practice…

1. The Significance of Transmission

The concept of “folk” normally has to do with the idea that something — it might be a song, a dance, an aesthetic, or a way of creating a song or dance, etc. — has been “passed down” from earlier generations to the present one. I’ll deal more with the notion of folk arts as historically rooted in a later post, but for now I want to concentrate on this “passing down” idea. Since people started writing and thinking about the “folk” concept, the idea of transmission has been central to definitions of the term. The collector and figurehead revivalist Cecil Sharp is often credited as the first to attempt a precise account of exactly what folk song was — and, crucially, what it was not — in 1907; his strategy was to identify a particular group of people, the carriers of folk song (i.e. the folk), and he described such people thus:

‘the unlettered, whose faculties have undergone no formal training, and who have never been brought into close enough contact with educated persons to be influenced by them.’ (Sharp, 1907: 3-4)

Needless to say, few folk artists nowadays (at least in the Western World) would agree with this portrayal of folk singers, dancers, musicians, or any other type of folk artist, as strictly illiterate! In fact, it was probably a little romantic and far-fetched even back in Sharp’s day – various scholars (Bert Lloyd for one) have pointed out that very few of those “folk singers” whose songs were collected by Sharp and his contemporaries were actually so removed from the trappings of educated society that they had not (for instance) sung a hymn in church, or had a letter or other news recounted to them by a literate friend or relative, even if they themselves were unable to read it. Nonetheless, the idea of oral transmission (the passing of cultural material directly from the mouth of one person to the ears and memory of another, without mediation) has stuck as a particularly powerful image. Sharp saw it as the process by which folk songs and melodies acquired their intrinsically authentic, vernacular (and, let’s face it, national) character. He believed it was what led to the instinctive selection or rejection of material — and variations of that material — over centuries, making the tradition a kind of living, breathing, developing (or evolving) organism. And that idea has stuck. A quick look at the Wikipedia entry for “folk music” illustrates the point: it [currently] lists oral transmission and unknown authorship as common features (the latter being most often the result of the former). Perusal of a large number of academic texts will further illustrate the resilience of the concept, and it is also found resonating in the current international discourse around the concept of “Intangible Cultural Heritage“. Most forms of mediation involve some type of recording, thereby making intangible cultural material tangible; so the fervent desire to conserve and celebrate intangible cultural heritage would appear to hang on the assumption that the “real thing” must be unmediated, and [in practice] that means orally transmitted and maintained. 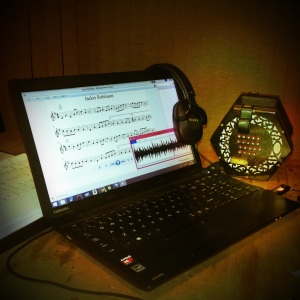 Although everybody nowadays tends to accept that contemporary folk practice involves a good deal of mediation (e.g. through written transcripts, printed sources, recordings, videos, etc.), the idea of oral transmission remains a very important point for anyone trying to understand what the folk arts are. Because to understand what they are is to understand what they were (again, more on the historically rooted nature of folk activities in an upcoming post…). I have argued elsewhere that the importance placed on the concept of oral (or, more usefully, aural) transmission, has played a significant role in encouraging the use of digital recording technology in folk music sessions as preferable to written notation. While recording and transcribing are both forms of mediation, the former continues to involve the musician’s development of their aural skills – that is to say, they’re still picking up a tune “by ear”, but they can do this more reliably and more quickly: unlike the wizened and venerable fiddler installed in the corner of the local pub, the source from which a younger musician is learning comes with pause and rewind buttons, and is thoroughly portable!  And the digital recording can also be tuned (in case the old fiddler’s strings had slackened), and – best of all for the learning folk musician — slowed down. But — for some folk musicians at least — it all still fits with the folk ethos because, when all’s said and done, you’re still learning by ear.

And so all this is valuable context for considering the relationship between digital media and the folk arts. For the reasons given above, folk arts participants tend to be very conscious of the ways in which they learn and pass on material. In folk music, it’s very important precisely because it’s different from (e.g.) Western classical music’s sophisticated (and seemingly dominant) written transmissive system.  More generally, there are relatively few creative activities in the Western world where one’s method of learning is, in and of itself, so integral as a criteria for labeling and evaluating the resultant creation.  I realise, of course, that people in any trade or craft can claim greater credibility by citing their tutelage at the feet of some great sensei: a sculpture who had studied with Henry Moore would likely enjoy a certain cachet over less fortunate artists in that medium. But the specifics of exactly how Moore had taught this sculptor would not have much impact on whether or not we perceived his/her creations as being sculpture. In folk arts, the method by which things are learned has been, for some time, an ontological feature – an “essence”, all wrapped up with evaluative concepts of authenticity, immediacy, nativity, legacy and tradition.  To invest in digital methods of “passing on” the folk arts from one person or generation to another (e.g. via YouTube, or Facebook), is — to some extent — to redefine the activity, or at least to engage in a reconciliation of apparently conflicting cultural values.

This is one reason why I wanted to embark on the Digital Folk research… I wanted to find out how people reconcile the ideas of the traditional (including traditional transmission) with the modernity of new media. I’m looking forward to exploring how these two seemingly opposing worlds combine, not just in people’s behaviours, but also in people’s minds.

The Digital Folk Report has launched!

On 13th February we were delighted to be joined by a wonderful range of folk activists, folklorists, music and dance organisation representatives and digital media specialists to herald the publication...

We are delighted to announce that registration is now open for the Digital Folk conference (19 April 2017) at the University of Sheffield! We're currently in the midst of putting together...

My Tweets
Pytheas Theme by WPExplorer Powered by WordPress
Recommended
Cinzia went to China!
Cinzia talking to Ningbo University about Digital Folk “How do…